Private equity – how does it work? 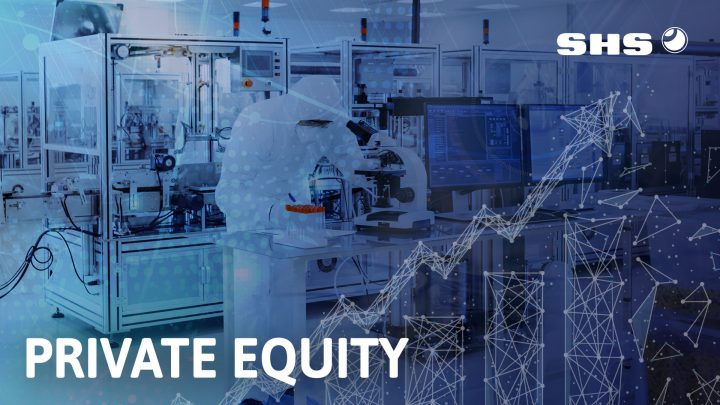 The term private equity originally comes from the English language and means “private equity“. The counterpart to private equity is public equity. A private equity company invests capital in companies that are exclusively privately held and therefore not listed on the stock exchange. Investments are usually made in medium-sized companies. In order to invest in other companies, a private equity company will ideally first engage in “fundraising”. In this process, money is raised from institutional investors, private and industrial investors and brought together in a fund. Once the previously targeted amount of capital has been collected from the investors, who are also called “limited partners” in this context, the fund does not raise any more capital.

The term of a fund determines how long a private equity investor must invest in unlisted companies, increase their value, and ultimately sell the shares at a profit. The term of a fund is often between ten and twelve years. This period is in turn divided into three phases: In the first phase, private equity investors look for potential investments that match the previously defined investment focus. The investment strategy can, for example, consist of concentrating on certain regions, investing only in selected phases of a company, or specialising in certain industries.

Private equity is one of the alternative investments, such as hedge funds. What they have in common is that they offer their investors high returns. The difference to hedge funds is that private equity companies invest in young companies (start-ups) via venture capital. Hedge funds, on the other hand, invest in the short term (e.g., shares). 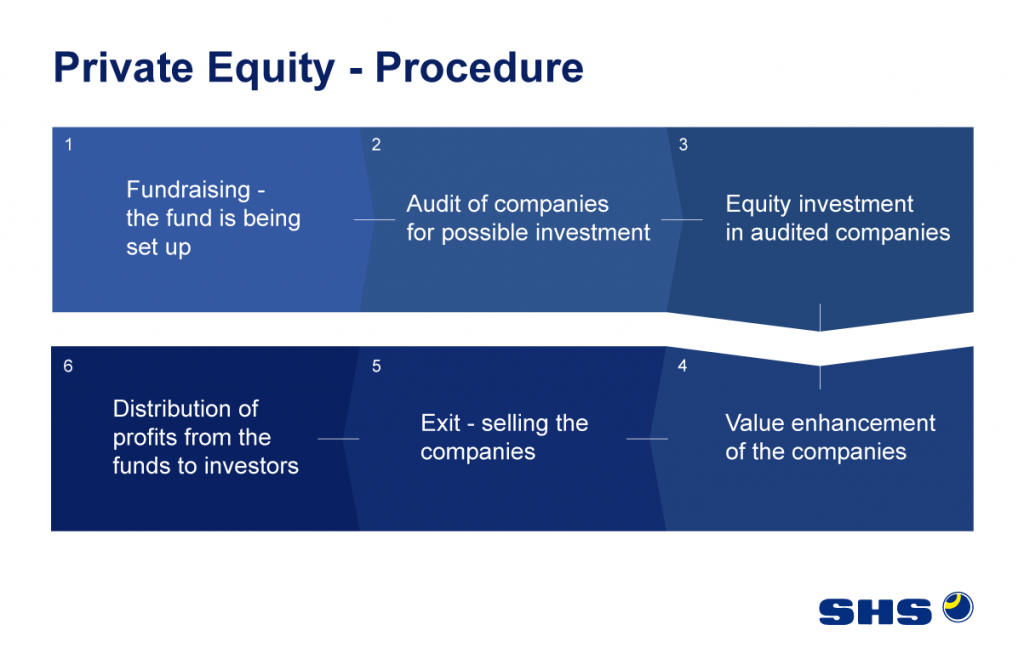 As soon as a potential investment is found that meets the fund’s criteria, the private equity company begins an intensive review of the company. If the initial analysis confirms the private equity company’s decision to invest, the examination continues after a so-called “Letter of Intent” (LOI) has been drawn up. This summarises the essential contents of the subsequent investment contract.

Often, external service providers are commissioned by the private equity company to prepare a “due diligence”, a detailed examination of the company, for certain areas of the company (e.g., technology or intellectual property). Accordingly, depending on the size of the investment, several due diligence reports may be available at the end of the audit phase, which present the economic, legal, financial, tax and technical aspects of the company.

The increase in value

After the investment, the second phase in the life of a fund begins – value enhancement. In cooperation with the company’s management, various measures are initiated for the successful further development of the company.

To offer the greatest possible added value, the private equity company uses its network and contributes its expertise from many years of experience, for example to enable international market entry, to generate new customer orders or to establish more efficient workflows. However, the private equity company usually does not act in an operational capacity, but in an advisory capacity, for example because of a seat on the company’s supervisory board.

Since a private equity company is always only a partner for a limited period of time, i.e., an investment within the fund term works towards optimising a company and selling it profitably, the third phase of a fund’s term now occurs – the final phase, in which the exit, i.e., the sale of the company, is prepared.

After the minority or majority shareholding has been completed and the enterprise value has been increased, the private equity company is now looking for a worthwhile exit opportunity. There are basically four possible strategies.

The first possibility is an IPO of the company. The necessary requirements must be met for this. In the so-called “Initial Public Offering” (IPO), the previously privately traded shares are publicly offered on the capital market.

The second option is a “buy back”. This means that founders or co-partners of the company buy back the company shares and thus increase their own participation in the company.

In a trade sale, the third exit option, the investment is sold to a strategic buyer, such as a competitor. Finally, in a “secondary buyout” there is also the possibility of selling the investment to another private equity company.

Other buyout variants are the management buyout (MBO), the institutional buyout (IBO), the employee buyout (EBO) and the leveraged buyout (LBO).

The distribution of profits

The proceeds of the respective exit are then paid out to the fund’s investors. It should be noted that all costs incurred during the life of a fund outside of the investments are also paid out of the fund.

This so-called “management fee” is a certain percentage of the fund volume and covers the administrative costs of the fund. In addition, the fund manager is granted a share in the investment performance, provided that the investors have achieved a predefined target return.

Private equity and venture capital – what is the difference?

Both the term private equity and venture capital refer to investment opportunities through equity capital in companies that are not publicly traded. The difference here always lies in the phase in which the target company finds itself. Private equity companies usually acquire minority or majority stakes in companies that already have stable cash flows and thus represent a lower risk. In addition, private equity companies may use debt capital to leverage the equity they have invested. The debt capital, which is often provided by banks, can then be repaid from the company’s income.

The history of private equity

The origin of private equity as an asset class goes back to Georges Doriot, who founded the American Research and Development Corporation (ARCD) after the end of the Second World War. The ARCD promoted private sector investment in companies run by returning soldiers. The first major success story of an investor in the private equity sector can also be traced back to the ARCD: In 1957, an investment of 70,000 dollars was made in the Digital Equipment Corporation, one of the first computer companies ever. The investment was worth over 355 million dollars after the company’s successful IPO.

The first start-up in the modern private equity market is Fairchild Semiconductor from America, which was the first company to produce a commercially viable integrated circuit in 1959. This was made possible by capital inflows from a company that later called itself Venrock Associates.

From these beginnings, an important area of the modern economy gradually developed, which today provides capital to young companies that are not yet able to obtain outside capital due to their early stage. In 2018, for example, 2168 deals with a volume of € 262.1 billion were concluded in Europe alone. Worldwide, the figures are even more impressive, with a buyout volume of almost 600 billion dollars, and underline the importance of equity capital.

In Germany, the first private equity company was founded in 1965 with today’s Deutsche Beteiligungs AG. Difficulties arose in the German capital market, however, because the risk appetite of investors in this country is less pronounced than in international comparison and important investors in this industry were missing. In addition, many companies maintain close contact with their house bank, which means that external capital providers are often viewed critically and are not the first port of call for liquidity requests. In the 1970s, for example, the invested capital in the private equity market in Germany amounted to just DM 560 million. Driven by the boom and the spirit of optimism in the 1990s, the volume of the private equity market in Germany multiplied to 4.5 billion at the turn of the century. In 2020, the investment volume in Germany was 12.5 billion euros and will continue to play an important role in economic development in the future. In the meantime, private equity has become a fixed component of the corporate finance world in Germany.

What does SHS do in terms of private equity?

Like other private equity firms, SHS raises capital from outside investors, limited partners, through “fundraising”. After the fund is “closed”, SHS uses the funds from the fund and invests in privately traded companies. Through SHS’s expertise and network, measures are then initiated in consultation with management to increase the value of the company. After the sale of the investment, proceeds are paid out to the limited partners.

SHS invests and participates in healthcare companies in Europe, with a focus on the DACH, BeNeLux and Nordics regions. Due to this strategic orientation and the maintenance of a track record since the company was founded in 1993, investors rely on the expertise of SHS. In the meantime, the company can look back on five fund generations. 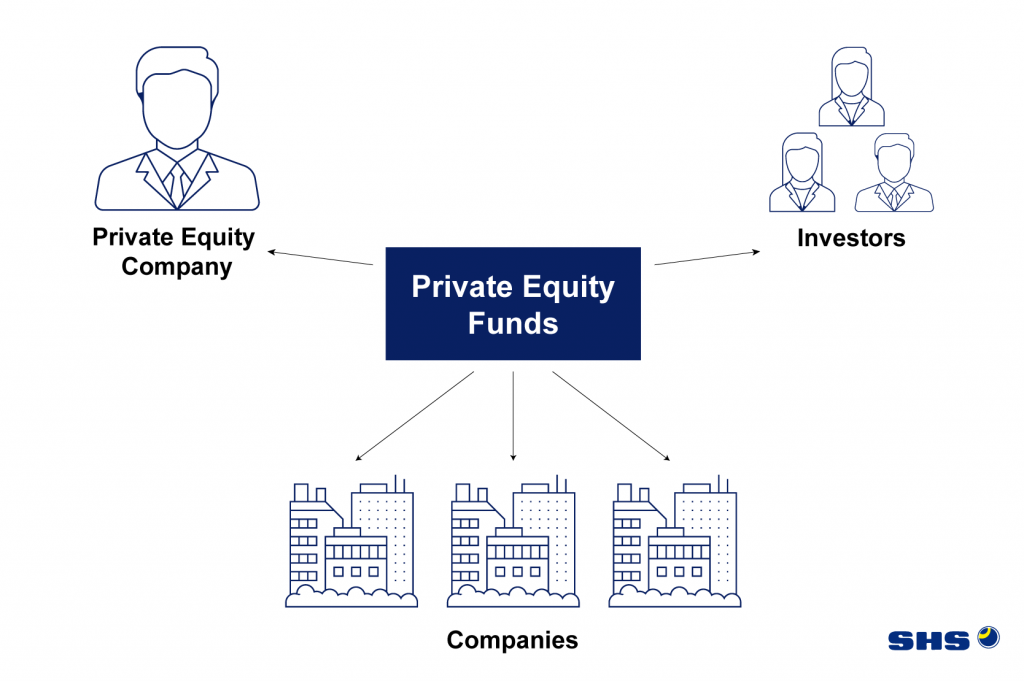 Who are the investors in a fund?

Private equity funds are subscribed by institutional, private, and industrial investors. The share of the “general partners”, or the managers of the fund, is therefore only a fraction of what external limited partners invest. There must be a strong trust between limited partners and general partners, which is based on the investment strategy, the track record, i.e., the success of previous funds and investments, and the expertise of the investment team.