From Hippocrates to Blazejewski: Endoscopy in fast-forward mode 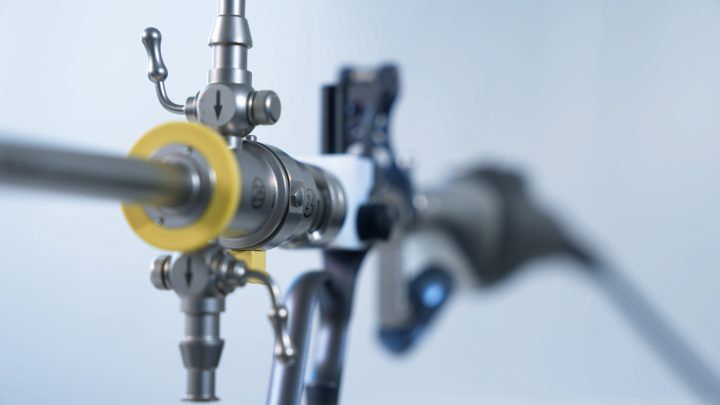 More than 510,000 colonoscopies for the early detection of colorectal cancer were performed in Germany in 2019. Compared to 2018, this was an increase of more than 14 percent. Screening colonoscopy plays an important role in the early detection of colorectal cancer. Today, the procedure itself is relatively uncomplicated and painless, thanks to state-of-the-art endoscopy technology. But how long has this technique been around?

Endoscopes in a wide variety of designs have become an indispensable part of everyday medical life and are used in various medical fields. Modern endoscopy is not that old. In 1806, a 35-centimetre-high metal vessel was presented for the first time in the “Journal der practischen Arzneykunde und Wundarzneykunst”. With it, the Frankfurt doctor Philipp Bozzini had invented the first real endoscope in medical history. The tin tube was covered with paper and leather and divided vertically: in one half stood a wax candle, in the other silver-plated tubes in various shapes. Clear principle: light in, image out.

Incidentally, Bozzini was not the first doctor who wanted to look inside the human body. Hippocrates of Kos (ca. 460 BC – 370 BC) had already dealt with rectoscopies. And at the time of the Roman Emperor Julian, the Byzantine physician Oreibasios (325 – 403) invented the first indwelling catheter by inserting a goose quill into a patient’s urethra.

Giulio Cesare Aranzio (1530 – 1589) brought light to endoscopy in the true sense of the word when he used a camera obscura in Venice to examine the inside of the nasal cavity by focusing the light beam. A real advance. The French surgeon Antoine Jean Desormeaux then opened a whole new chapter in endoscopy in 1865. He invented an endoscopic model and was the first to use Bozzini’s light guide. Desormeaux is therefore considered the father of endoscopy and built instruments that consisted of a system of mirrors and lenses. An open flame served as the light source, which was not always safe for the patients. The main field of application for Desormeaux’s device was urology.

The first optical endoscope with an integrated light source was built by the Berlin urologist Maximilian Nitze with the help of the Viennese instrument maker Josef Leiter. Nitze used this first illuminated cystoscope on a cadaver for the first time in October 1877 and successfully on a living patient a few months later. A milestone in endoscopy. Nitze was even able to perform minor procedures on the bladder and take the first photographic images of bladder findings. The so-called Nitze-Leiter device was modified further and further, so that subsequently abdominal endoscopies (1910), thorascopies (1910) and arthroscopies (1921) could be performed. The first successful gastroscopy finally took place in 1932.

Finally, the first use of a cold light source by the Tuttlingen entrepreneur Karl Storz was groundbreaking in the 1960s. He combined a glass fibre light guide with the rod lens system of the English physicist Harold Hopkins.

Endoscopic surgery developed in parallel with the progress of endoscopic devices. Kurt Semm, a professor of medicine in Kiel, is considered the father of endoscopic surgery. Semm strongly advocated “keyhole surgery” – and initially met with much resistance from colleagues. But it was he who performed the first laparoscopic appendectomy in 1983, a groundbreaking achievement by Semm the gynaecologist, which was, however, initially vehemently rejected by large parts of the surgical community. However, the technique was unstoppable: in 1987, surgeon Erich Mühe from Böblingen in Swabia used Semm’s instruments to remove a gall bladder by laparoscopy for the first time.

Today, endoscopy is one of the routine procedures in medicine. And microinvasive surgery is also constantly developing. Companies like Blazejewski MEDI-TECH GmbH from southern Germany support this development with ultra-modern, extremely powerful 2- and 3-D endoscopy systems. With the development of so-called chip-on-tip systems, the company is already on its way to another milestone in endoscopy. Here, a miniature camera at the tip of the endoscope, which sits on a chip, takes pictures. These are processed by the chip at lightning speed and transmitted to the monitor in the operating theatre. The surgical team thus gets better images and can make safer decisions and operations. The passionate engineer Reinhold Blazejewski is sure that even with this development, the exciting story of endoscopy is far from over.