For years now the German medical technology sector has been growing much faster than the country’s economy as a whole. Demographic change and confidence in health products “Made in Germany” are making medical technology a successful, profitable and stable industry, which has remained largely independent of economic cycles. After strong growth, however, the upward trend in medical technology has lost momentum since 2016. The index value of 112 % (2016) fell to 110.5 % in 2017 and again in 2018 to 109.7 %. The sector’s dynamic growth may have been slowed by stricter regulatory requirements, which came into force in 2017 with the Medical Device Regulation. The development of the sector in relation to the economy as a whole is indicated in the Medical Technology Index published by SHS Gesellschaft für Beteiligungsmanagement, a Germany-based late-stage venture and small cap investor with sector funds for the medical device industry in the DACH region. The medical technology investor designed and calculated the index in cooperation with Christian Koziol, Professor and Chair of Finance at  the University of Tübingen, Germany. The index measures the medical technology sector’s potential for innovation and growth based on the four indicators turnover, employment figures, patent approvals and share price development. The index is to be updated annually in the future.

Christian Koziol, Professor and Chair of Finance at the University of Tübingen and one of the initiators of the index, says: “The medical technology sector is of major importance for Germany as an industrial location. The SHS Medical Technology Index is intended to quantify the growth, innovativeness and economic strength of the sector using economic indicators, to show its development over the period under review and to compare it to the economy as a whole. As such, the index can provide precise information on how Germany’s medical technology sector is developing.”

The SHS Medical Technology Index tracks the development of the industry since 2010, which has exhibited a more favourable development than the economy as a whole since then. An outperformance peak of 112 % was reached in 2016. Growing complexity and an increasingly tight regulatory framework, however, seem to have hampered dynamic growth since then: “The index curve clearly indicates that the medical technology sector has shown above-average growth. The sector is less volatile and cyclical, and also creates many jobs,” says Hubertus Leonhardt, Managing Partner at private equity firm SHS. 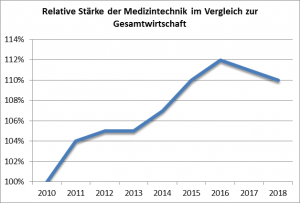 The Medical Device Regulation, which has been in force since 2017, places significantly higher demands on approval and testing procedures than the previous directive did. This increases development time and costs, which can result in a financial burden and a difficult equity situation, especially for small and medium-sized companies. Many businesses of this size have difficulty managing the additional expenditures required for innovation projects and recertification of existing products. “These companies in particular have an increasing need for strong and well-connected partners who can support them financially and strategically in overcoming regulatory hurdles and growing their business. However, we also see a trend towards small and medium-sized companies increasingly looking for acquisition opportunities. They are likely trying to reach critical mass. In addition to that, they can also gain market share and expand their product portfolio by way of mergers and acquisitions”, explains Leonhardt.

Patents approved in the medical technology sector in Germany 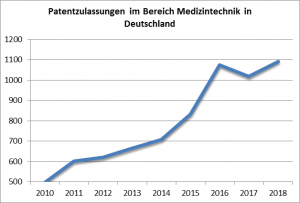 “The fact that there were not significantly more medical technology patents approved in 2017 and 2018 than in 2016 is no reason to sound the alarms” says  Hubertus Leonhardt, partner at medtech investor SHS. After all, it is also a fact that the industrial strength, the availability of well-trained engineers and, above all, the close links between university and research environments and business in many regions of Germany have created a good climate for innovation in the industry. “However, looking at the development of patent approvals in the medical technology sector also shows that fundamentally advantageous framework conditions can quickly be squandered, especially if an industry’s innovativeness is inhibited by regulatory measures”, Leonhardt points out. This requires extreme sensitivity on the part of legislators and regulatory authorities, “especially when the economic environment becomes rougher as a whole”. The medical technology industry is facing major upheavals in a number of regards. In the future, the challenges of demographic change and developments in areas such as digital health and the management of chronic diseases will drive further growth in this sector. Hubertus Leonhardt observes that the USA is tending to reduce regulatory frameworks. In Europe, on the other hand, he notes a contrary trend: “While the USA appear to be relying on innovation-friendly framework conditions, Europe is threatened with losing its lead due to the increasing density of its regulations.”

About the SHS Medical Technology Index

The SHS Medical Technology Index was developed by SHS Gesellschaft für Beteiligungsmanagement in cooperation with Professor Dr. Christian Koziol from the Eberhard Karls University of Tübingen. The index records the growth potential, innovativeness and economic performance of the German medical technology sector and compares it with that of the German economy as a whole. To this end, economic indicators (number of patent approvals, turnover or GDP, employment figures, share prices) were recorded and analyzed for both the industry and the economy as a whole since 2010. The resulting data was then normalized using a mathematical model and weighted before being entered in the index. The index will be updated annually in the future.

SHS Gesellschaft für Beteiligungsmanagement is based in Tübingen, Germany and invests in medical technology and life science companies with a focus on expansion financing, changes in shareholder structures and successor situations. SHS holds minority as well as majority interests. The company was founded in 1993 and has since gained extensive experience as an industry investor, which supports the growth of its portfolio companies through a network of partnerships regarding the introduction of new products, regulatory issues or entering new markets. The SHS fund’s German and international investors include professional pension insurers, retirement funds, strategic investors, funds of funds, family offices, entrepreneurs and the SHS management team. The AIFM-registered company invests up to €30 million in equity capital and volumes exceeding this amount are implemented with a network of co-investors. SHS is currently investing from its fifth fund. The fund has already received capital commitments of more than €130 million. Further information: https://www.shs-capital.eu