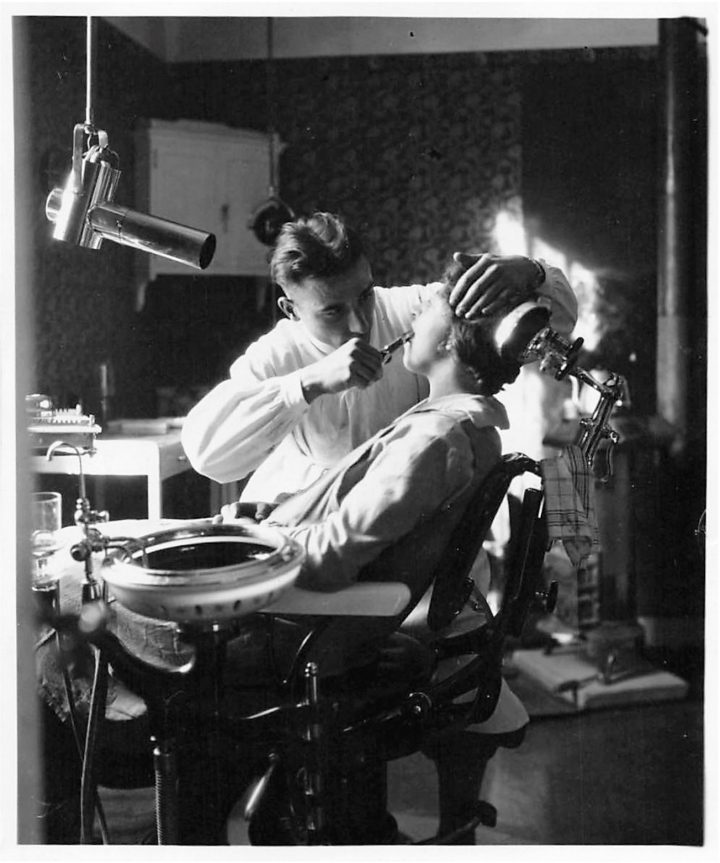 Dentist appointment 14,000 years ago
Regular visits to the dentist are part of our natural health routines throughout the year, even if not every appointment in the dental chair is equally pleasant. But we should not complain, but feel privileged, as a look at the history of dentistry shows. It begins about 14,000 years ago in a rock cave near Sovramonte, a two-hour drive south of Bolzano. There, a male patient was treated for a carious molar with a pointed stone blade. A dental medical masterpiece for that time. The same procedure is also documented in Pakistan 5,500 years before Christ. In Denmark, a molar from the Neolithic period was found that had even been drilled into.

First dental fillings in the 7th century
It is believed that the very first dental work was done by the Etruscans and Phoenicians around the middle of the 1st millennium BC. The first amalgam fillings were made, believe it or not, in China in the 7th century. The first gold fillings were placed in wealthy patients probably in the 14th or 15th century; an enormous advance, although certainly not painless. Those who could not afford gold had to make do with lead. Lead is called plumbum in Latin, and this then became the word plumbum, which we still use today.

Swedish revolution: the first titanium implant
It took almost 400 years from the first gold filling in the late Middle Ages to the first dental implant. Per-Ingvar Brånemark, a Swedish orthopaedic surgeon and lecturer in anatomy, placed the first titanium dental implants in taxi driver Gösta Larsson in 1965. Brånemark, an important pioneer in dentistry, coined the term osseointegration a year later and demonstrated that the human body tolerates the integration of titanium into living bone tissue. In 1982, he presented the principle of osseointegration of titanium implants for the first time at a congress: a milestone in dental technology and dentistry. The father of implantology died in 2014 at the age of 85.

Implant 4.0: TRI Dental
It is not known whether Per-Ingvar Brånemark witnessed the founding of TRI Dental Implants in the heart of Switzerland. We assume that he would have approved of the pioneering spirit and innovative drive of TRI founder Tobias Richter. Richter and his team opened a new chapter in the history of implantology in 2011. It all started with the bone-level implant system: TRI Performance Concept. And now, in 2021, TRI is making history again. A few months ago, the matrix® implant system was presented, which for the first time does not require an intermediate part (abutment) between the implant and the crown. The visionary goal of the dental pioneers is the perfect connection between state-of-the-art prosthetic restorations and the matrix® implant system without abutment and without cementation.