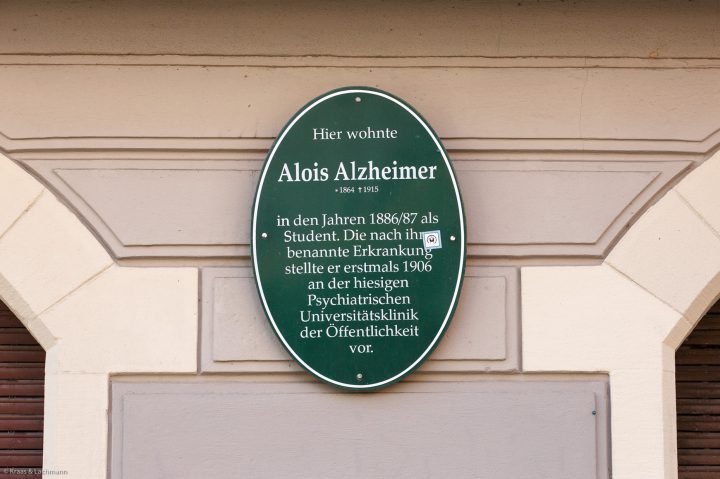 3 November 1906 is an important date in the history of Alzheimer’s disease. For on this Saturday, the physician Dr. Alois Alzheimer (14.6.1864 – 19.12.1915) described a type of dementia disease for the first time at a specialist conference at the Tübingen Nervenklinik. Alzheimer, who was a student in Tübingen in 1886/87, had found protein deposits (plaques) in and between the nerve cells in the brain of a patient in Frankfurt after her death. The patient, who was treated by Alzheimer in Frankfurt, suffered from severe memory disorders and was described as suspicious and also aggressive. Before her death, Auguste Deter said of herself, “I have lost myself, so to speak. ” Alzheimer’s lecture in Tübingen was hardly noticed, despite what today is seen as a groundbreaking discovery. It is said that there were not even any enquiries.

It was not until a year later, in 1907, that the psychiatrist and neuropathologist made his medical discovery public in an essay: “On a peculiar disease of the cerebral cortex”. In 1911, after examining the brain of another deceased patient, he diagnosed a “later-onset senile dementia with a slower course.” In the same year, Alzheimer’s supervisor Dr. Emil Kraeplin included the medical history of Alzheimer’s first patient in his textbook and named the disease “Alzheimer’s disease”. Alois Alzheimer himself died in 1915 at the age of only 51. In Tübingen, a memorial plaque at Hafengasse 6 commemorates Alois Alzheimer, who lived as a student in what was then the Prinz Karl Hotel.

It was not until the 1960s that Alzheimer’s research started up again, after almost 50 years of very little happening. Despite great efforts, there is still no therapy to cure Alzheimer’s dementia. Yet the figures are frightening. Dementia is diagnosed around 900 times a day in Germany. The number of dementia patients in Germany alone is currently about 1.5 million, with a strong upward trend. Due to better diagnostic possibilities, the patients are also getting younger. However, not all dementia is the same; there are many variants and the entire diagnosis process is psychologically very painful for those affected and their relatives.

Around 60 percent of all dementia patients suffer from Alzheimer’s dementia. At 15 percent, vascular dementia is the second most common form; it is attributed to circulatory disorders of the brain. Rarer forms of dementia are Parkinson’s dementia, dementia caused by medication or metabolic disorders, or dementia resulting from a craniocerebral trauma.

Unfortunately, too little is known about the causes and risk factors of dementia. It is known that genetic factors are important for the frequent occurrence of Alzheimer’s disease. However, these genetic factors are the sole trigger of dementia in only 3 percent of all cases. The main risk factor is age. It is now also assumed that depression promotes dementia, as do sleep disorders, diabetes, cognitive disorders and poor social contacts. However, the connection between migraine and dementia is not certain. Some researchers suspect that migraine patients with aura symptoms have a higher risk of developing dementia later on. By the way, the Belgian company Salvia, which develops implantable neurostimulation systems for the treatment of chronic migraine, is not concerned with dementia, but with the clinical picture of migraine. (Link to Salviva: www.salvianeuro.com)

The fact is that much more research needs to be done in this area, because the large number of dementia patients already poses enormous challenges for those affected, but also for their relatives and caregivers, and these challenges will not diminish in the future. Experts in Germany and the USA, where, by the way, much more funds are flowing into dementia research, assume that a huge wave is rolling towards us here, for which our society is insufficiently prepared.